Well, making it to just about the half-way point in our journey from L.A. to Chicago, we got to see some pretty rad views and rode plenty of sections on the road less traveled. We don't make it this far east on two wheels very often, so being able to run through the vast rural areas was quite the experience. Despite "only" being half-way through our ride, these were the 4th and 5th states we rode through and being able to see new things every day made us just want to ride even more! There's plenty of hidden gems along the way, you just have to find them! 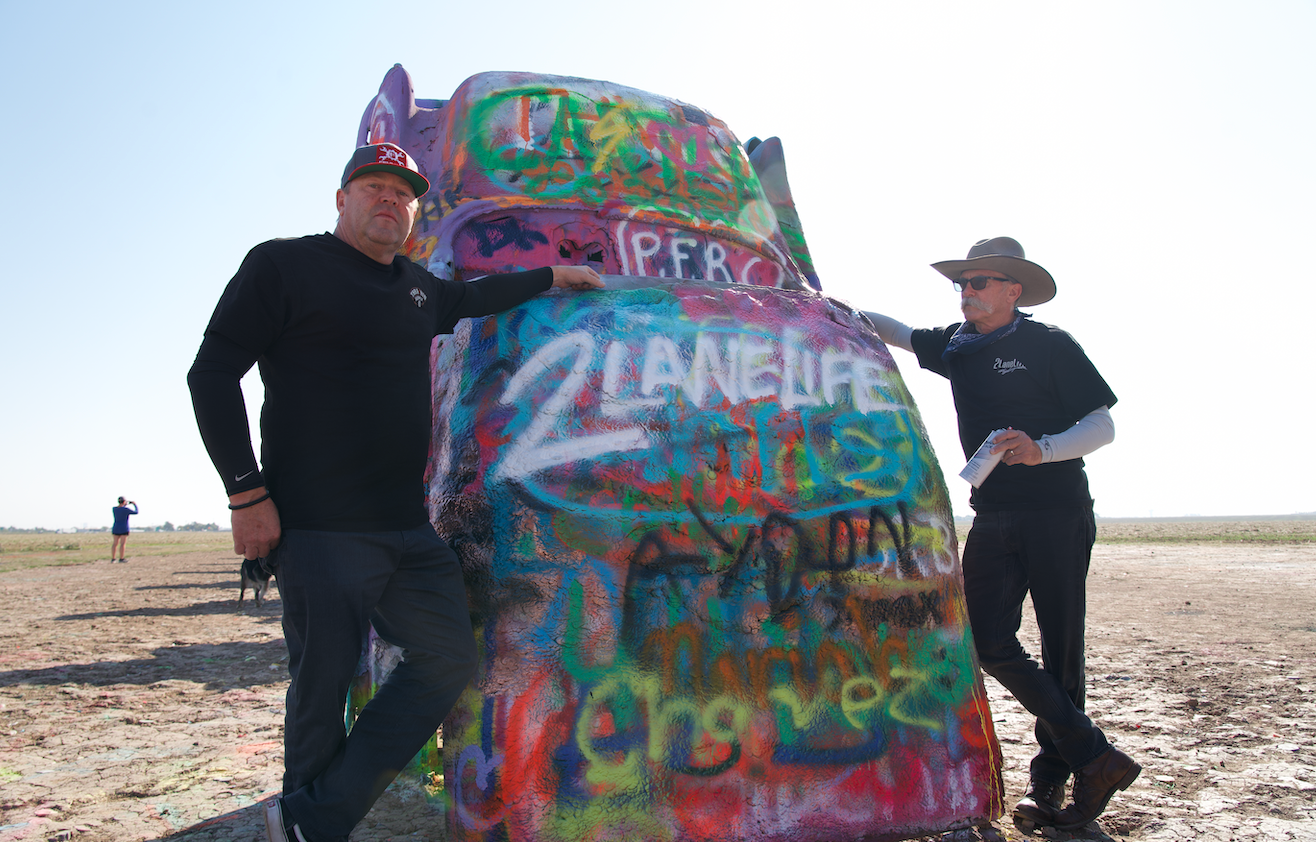 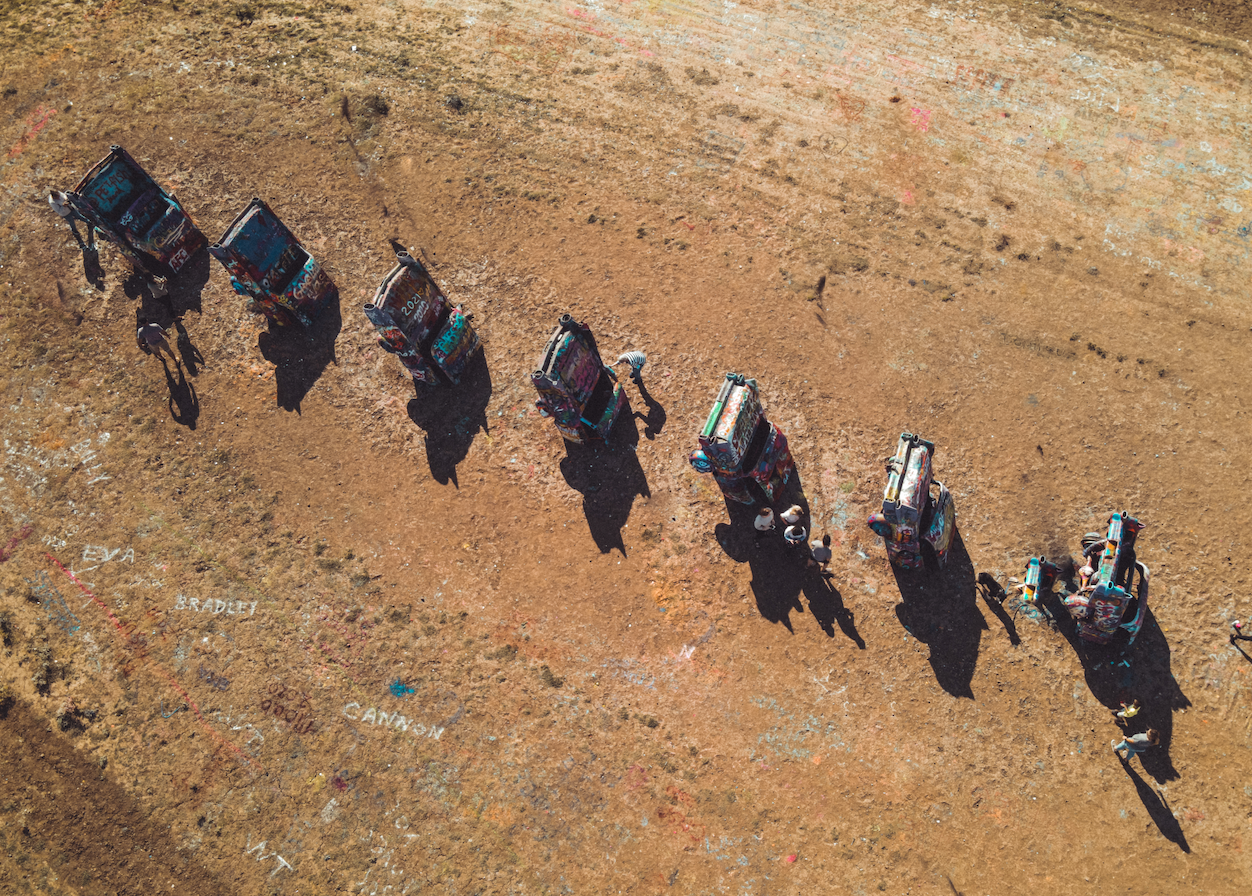 Although we passed by it the night before on our way in to Amarillo, we wanted to show you guys Cadillac Ranch during the day to get some cool shots and share some history! Just a short ways down the road from our hotel, and there it was!

Cadillac Ranch is an installation made up of 10 different Cadillacs ranging from the years 1949-1963 dug into the ground. It was originally located in a wheat field, but in 1997, the installation was moved by a local contractor to a location two miles to the west, to a cow pasture along I40, in order to place it farther from the limits of the growing city. It was a super unique thing to see, and we even got to spray paint it! The cars are covered in hundreds of layers of paint from all the visitors adding their own personal touches! 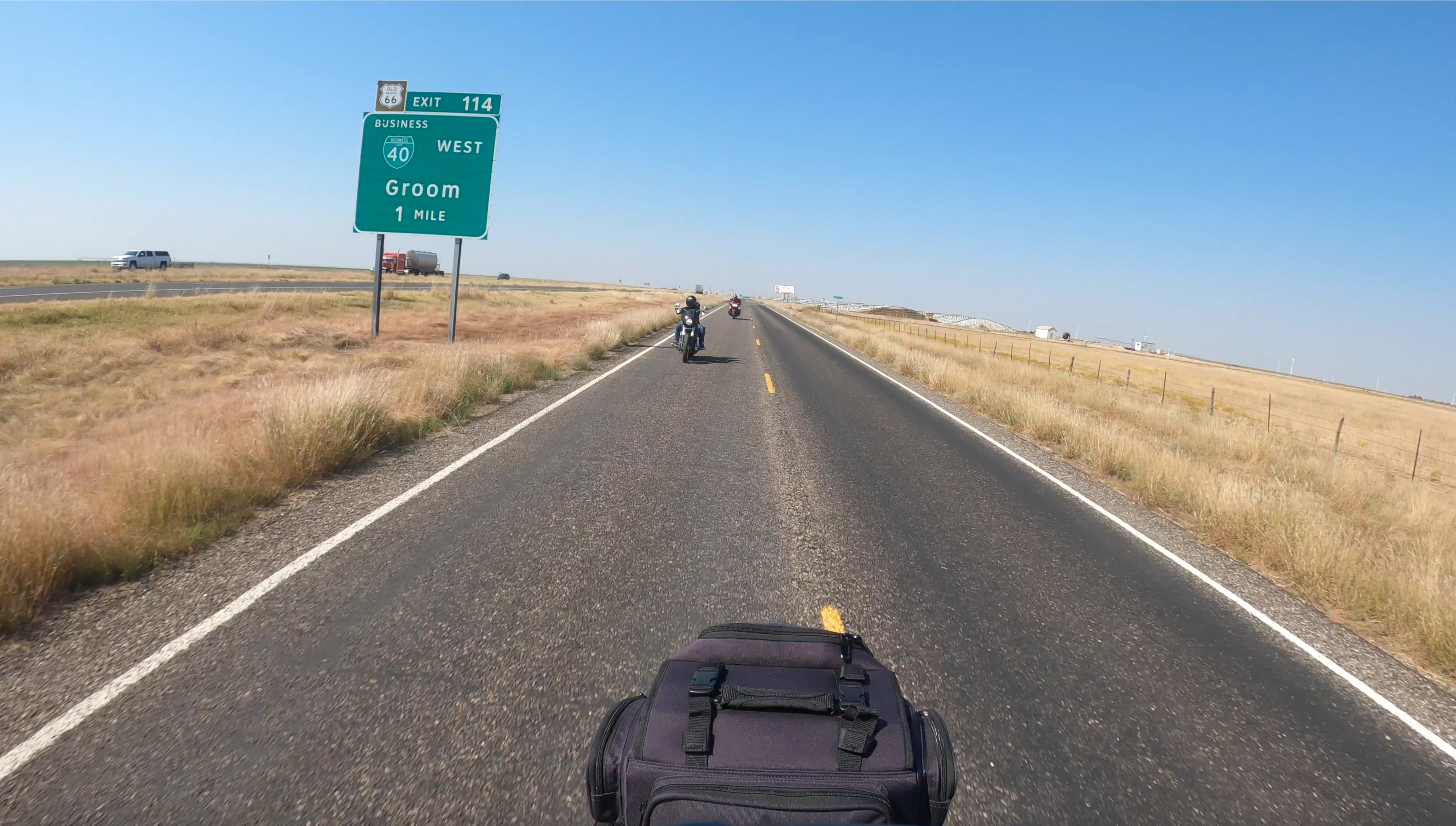 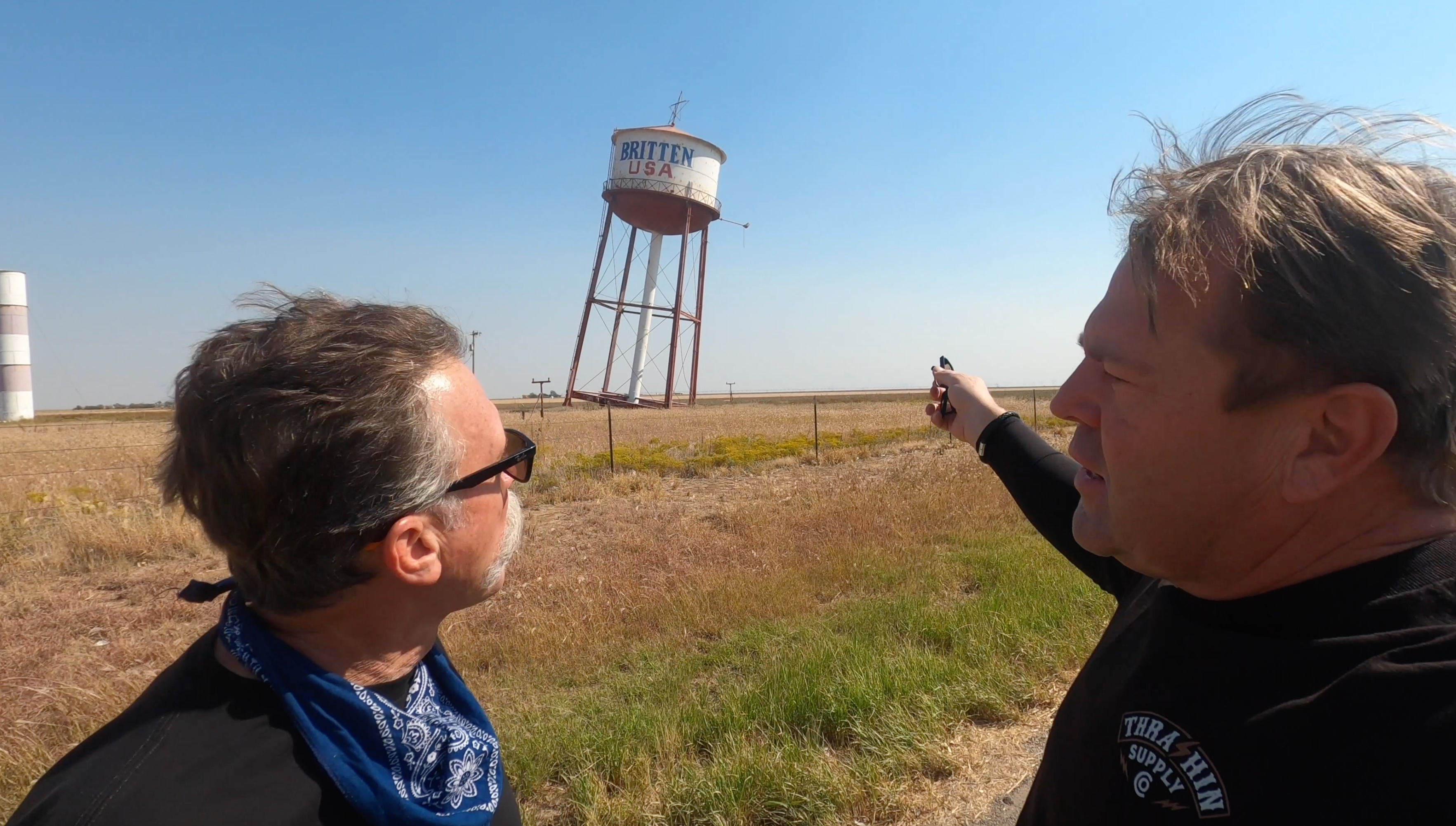 Up next, we got back on the road and got to cruise down some cool stretches of the 66 paralleling the 40. These spots were great as there was no traffic or trucks to deal with and the roads were a smooth ride! Before getting some serious seat time in, we took a quick stop by the Leaning Tower of Texas, which is a roadside Route 66 attraction in Britton Texas.  It was originally a functioning water tower which was slated for demolition until Ralph Britten purchased and moved it to serve as an advertisement for his truck stop and tourist information center. The now boarded truck stop can still be seen, set back off the road behind the tower. 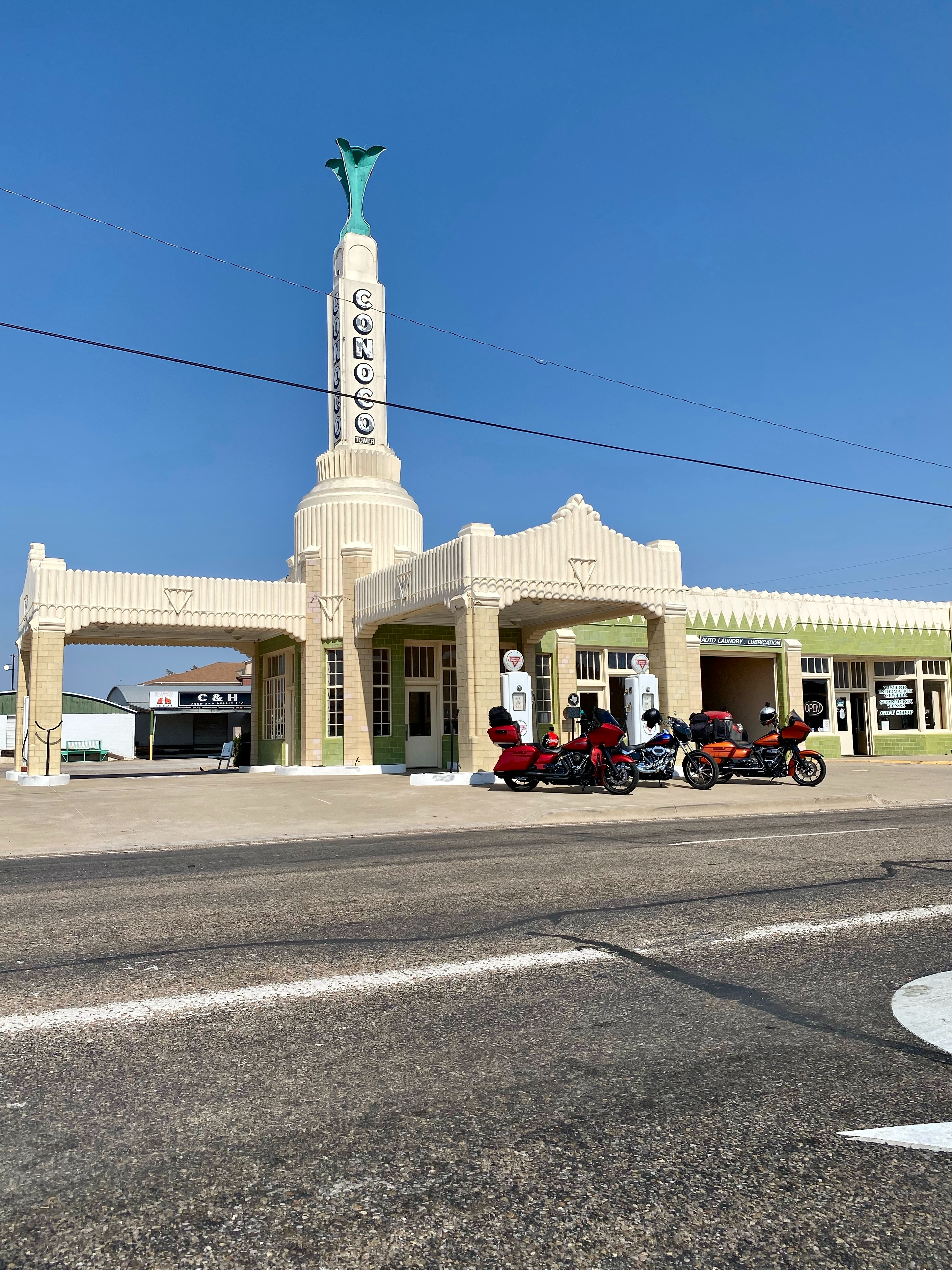 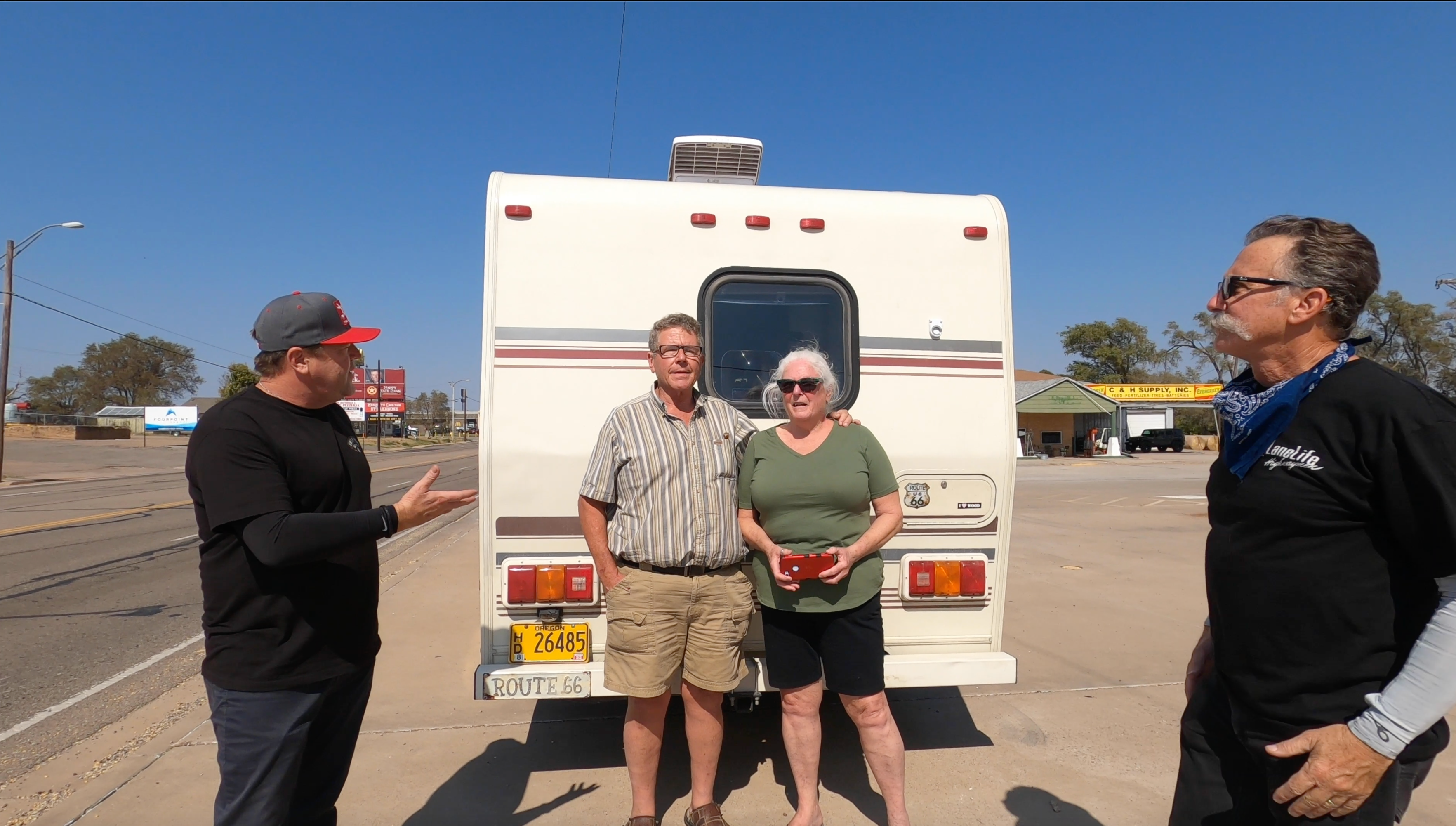 Our next stop would be in Shamrock Texas at an old Conoco Station known as Tower Station. Attached to a cafe called the U-Drop Inn, it’s an iconic Route 66 stop as it was one of the first commercial businesses along the route. Once larger highways were built in the mid-50’s and many towns along the 66 were bypassed, less people traveled this route, and the number of visitors in the town of Shamrock began to decline. The property was eventually abandoned, but in 2003, they were given a second chance when they received a federal grant for $1.7 million to restore the building to its former glory, which now includes a visitor’s center for this piece of history. While we were there, a couple pulled up who was also traveling the entire Route 66. Ron and Patty came from Oregon to travel the 66 while they were both 66 years old, and planned to hit every little stop along the way! It was awesome meeting like minded people on the same journey, regardless of the chosen vehicle. We talked a bit, shared some stories, then got back on the road on the way to Elk City, Oklahoma. 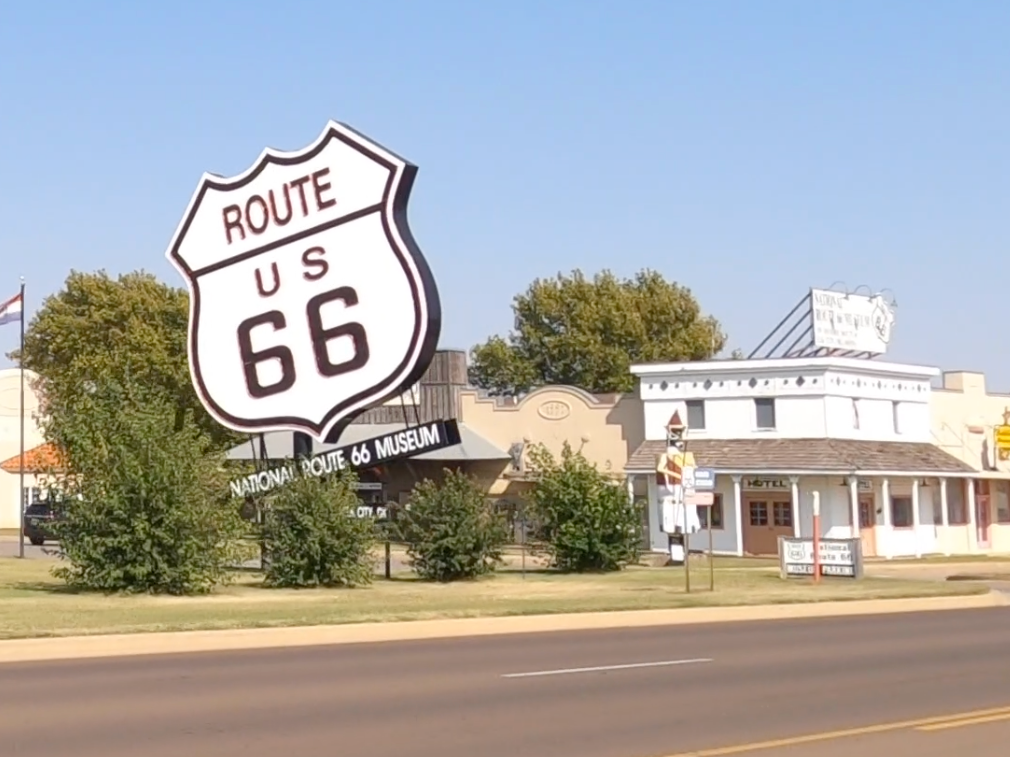 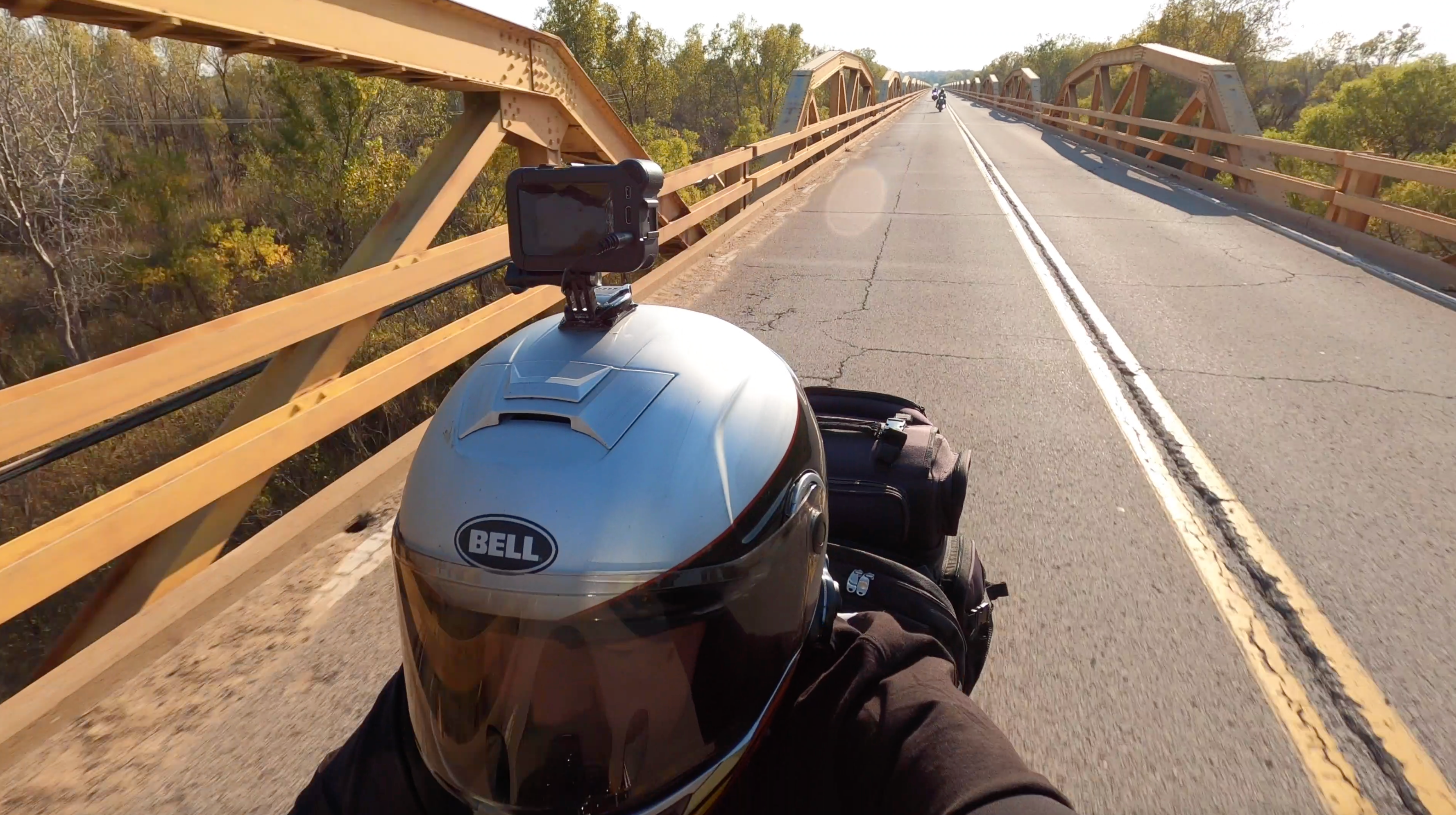 After rolling into Elk City, we got a quick bite and headed over to the National Route 66 Museum and the Old Town Museum. The Old Town Museum is made up of old buildings from the era, and made for an interesting walk-around. While we didn’t make it inside the National Route 66 museum, it has lots of cool exhibits inside and depicts many of the places that made Route 66 famous. They have info on all 8 states, and have all kinds of recordings, videos, and classic memorabilia.

We got back on the road and burned some miles as we headed towards Oklahoma City. Along the way, we got ride across an amazing bridge, known as the Pony Bridge or the William H. Murray Bridge in Bridgeport Oklahoma. A long straight bridge with an old rusted structure gave it that nostalgic feel of a true original Route 66 bridge, which it was. 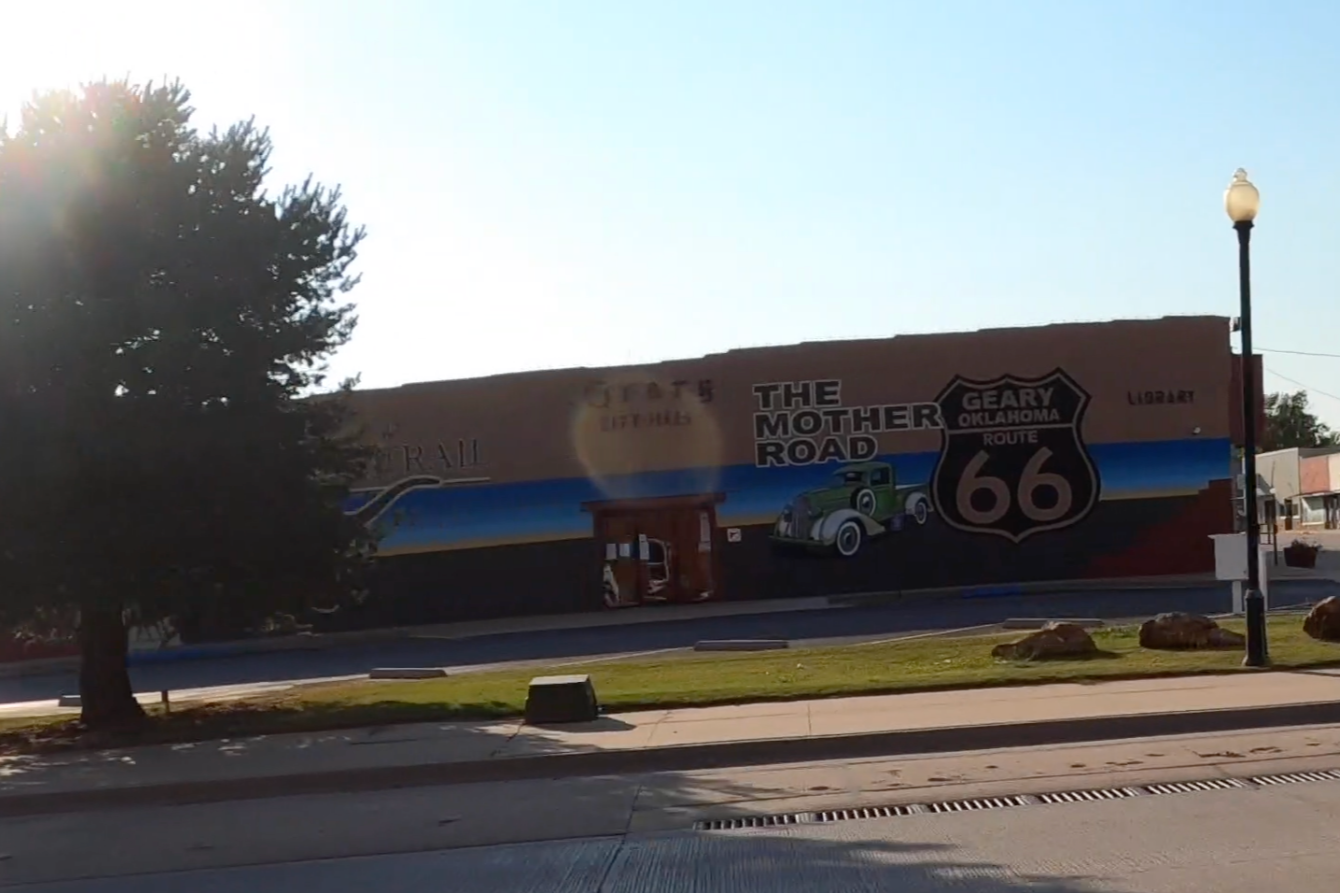 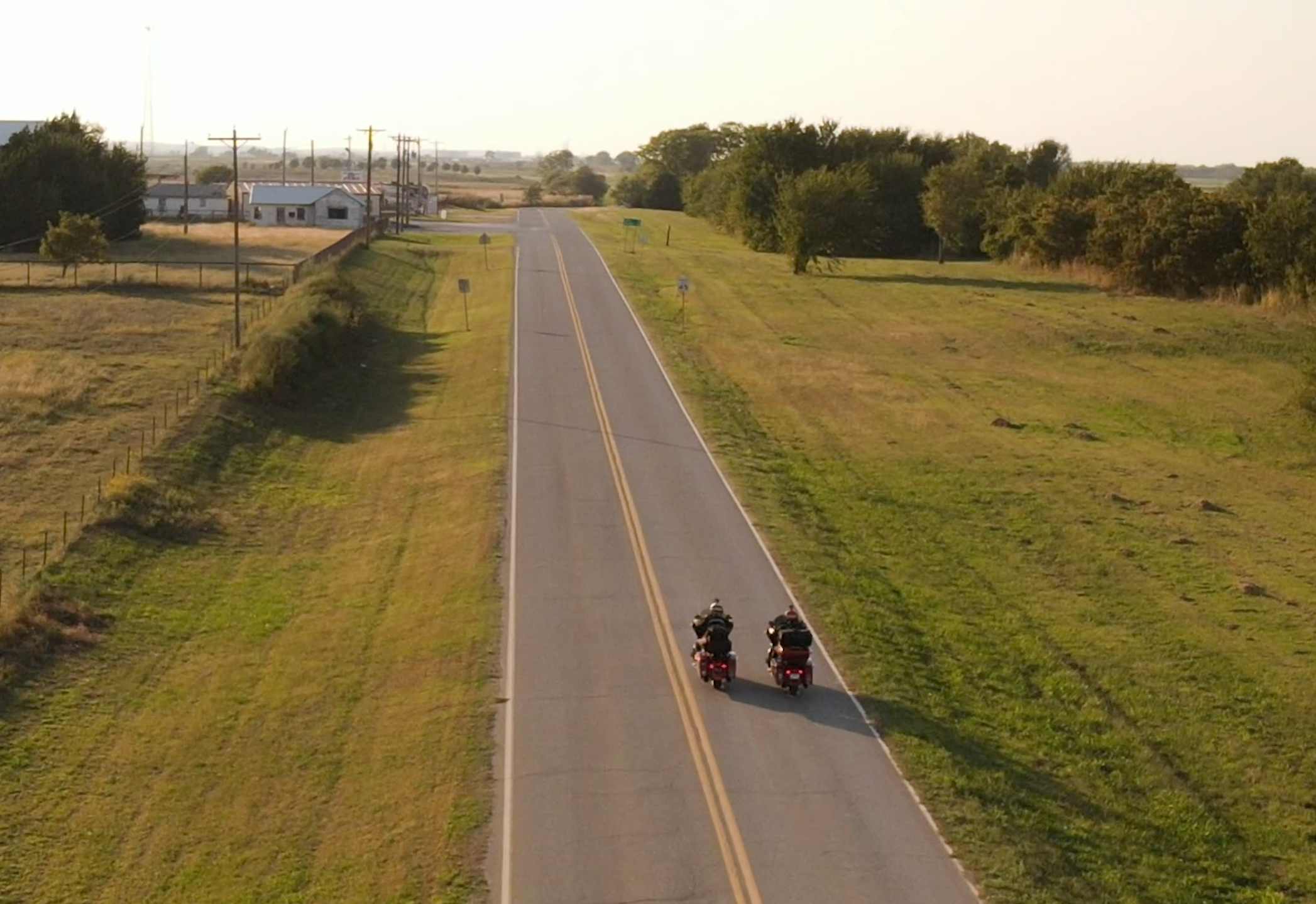 Shortly after the bridge, we rode through the town of Geary, which had some neat history throughout. There were murals, more old fueling stations, and some popular restaurants. The town has a population of around 1,300 people. Although small, it was still very much alive and was full of historic buildings and attractions.

Up next, we headed towards the Calumet area. Once we were out there, it was just long stretches on narrow 2Lanes through farm land and other large properties. We saw some run down buildings, lots of cows, some campsites, and even some huge grain elevators. We rode through the area approaching golden hour, and the rolling green hills accompanied by the dimming sun, made for quite the view. Our landing point for the day would be Oklahoma City, so we had another 50 miles or so until we reached home base.

We stayed at the Springhill Suites by Marriot out there and it was a great stay. For the price of a cheap motel in California, we each got some big suites and it was a solid place to relax for the night. We grabbed a well-earned dinner down the road killer bbq down the road and enjoyed some drinks before resting up for another long day of riding to Missouri the next day. Gotta earn your beers folks! 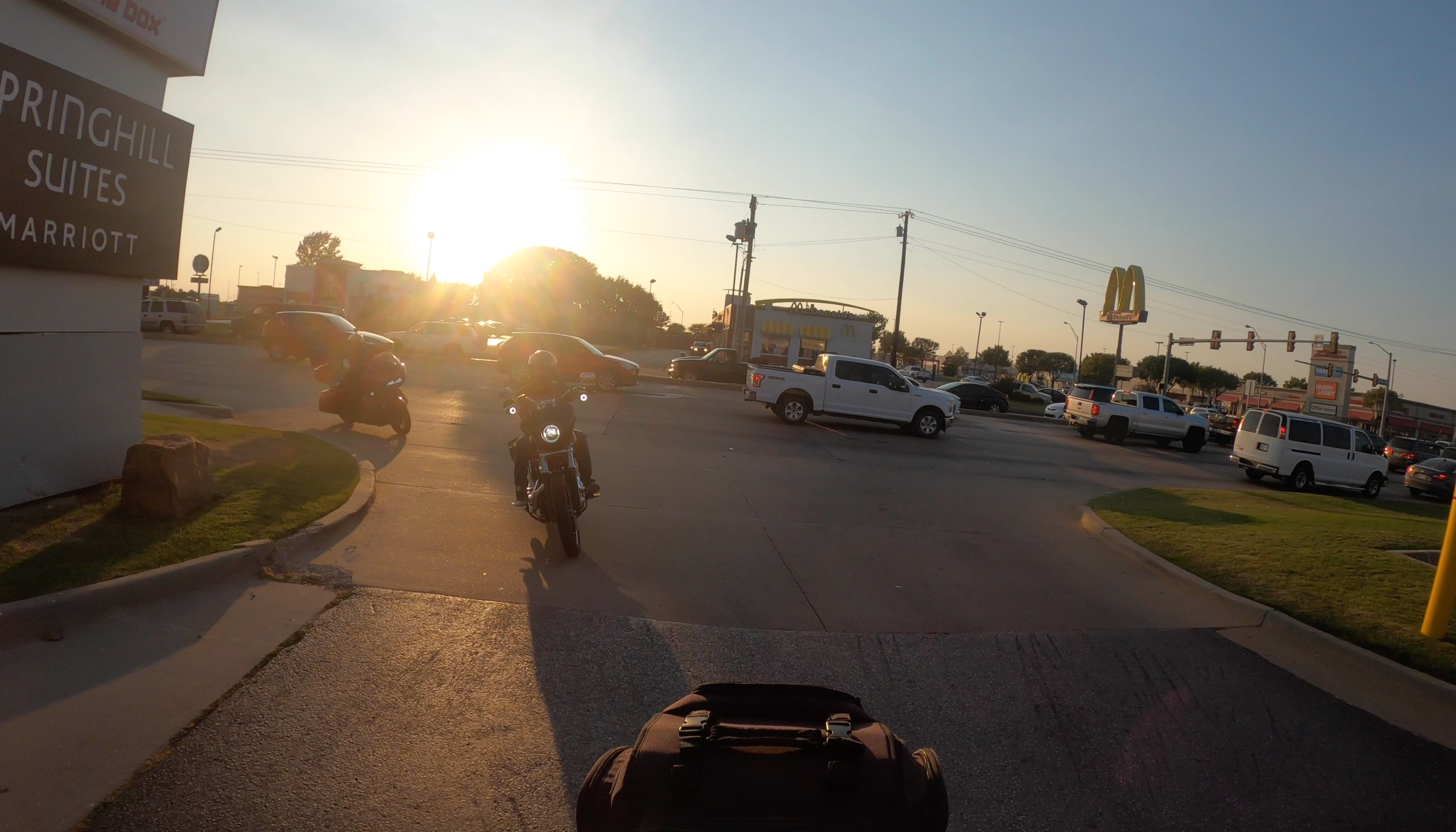 For navigation, we used Route 66 Navigation to get some history on all of the little stops and for ease of navigation to and from destinations on Route 66 as much as possible. Overall, we had a pretty solid experience with their app, so if you decide to ride Route 66, check it out!

We hope you guys enjoyed this section of the ride, because we sure did! The farther east we got, the more new views we saw, and we were excited for the roads to come. Being able to put this trip together on such short notice and just going with the flow made it an enjoyable experience and we’d recommend giving it a shot, regardless of the pace or vehicle. There’s so much hidden history along the way, you just have to see it for yourself!

See you next week, thanks for stopping by!